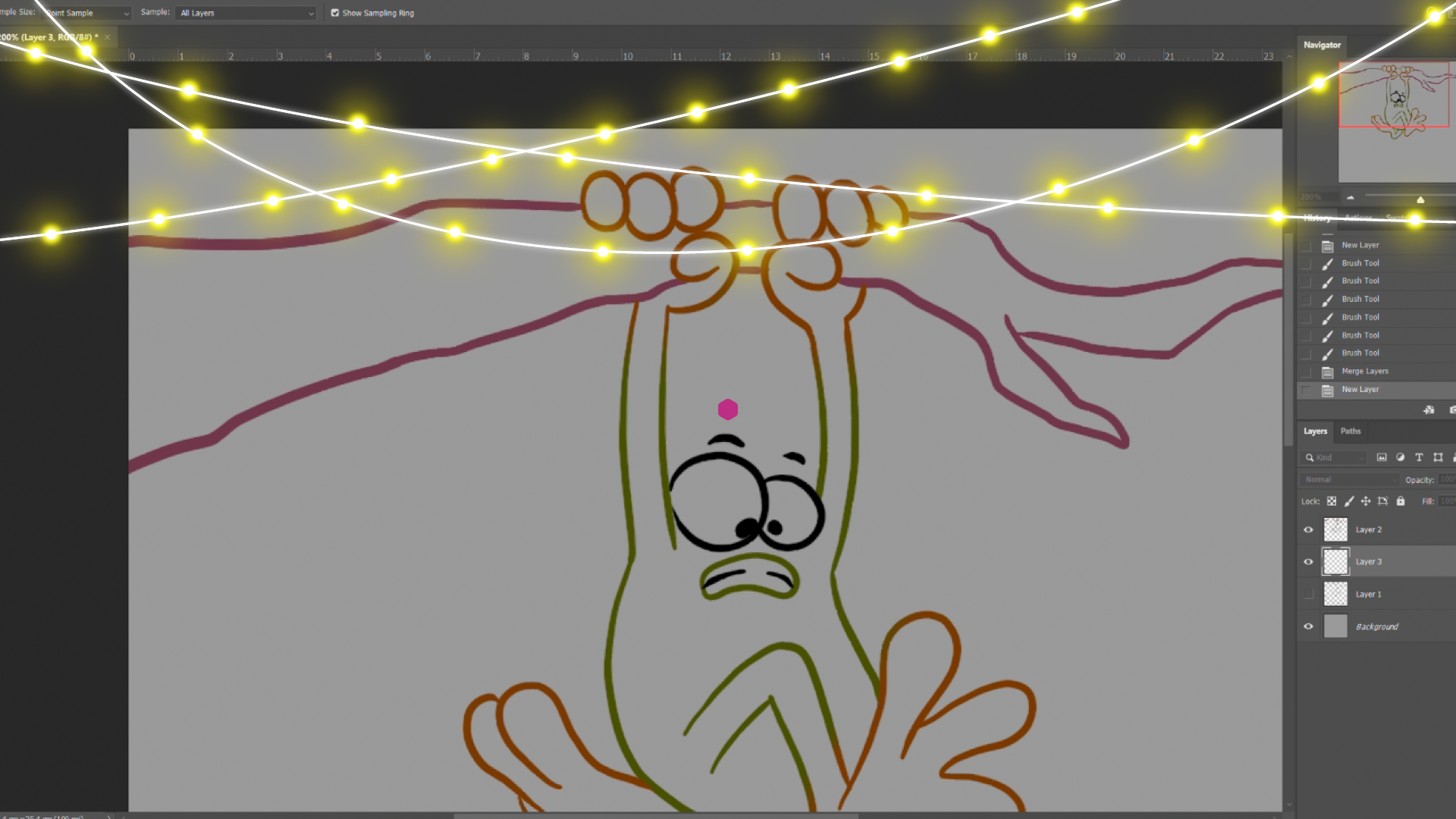 On the 12th day of Advent Gaming Corps says: let’s get creative! Again! Today marks the second calendar entry where we explore Gaming development, this time focusing on art.

The first venture into Gaming development was on December 6th on the topic of game design, covering basic gaming concepts and then by way of example, taking a closer look at the work currently done at Gaming Corps. As the industry of Gaming covers such a wide variety of products and genres, there are equally numerous ways of structuring the development process. Last time we therefore took a page out of the book of our Game Designer, and today we do the same, this time enlisting our Game Concept Artist Emmanouil Alimpertis as a guide into the magical jungle of creating art for videogames.

The game development process is as mentioned lengthy and iterative, where each segment of design contains many small details and takes several steps to finalize in terms of blueprint. Using the game Oh Frog as the example, Emmanouil is engaged early on in the process. First there will be the basic flow described, the introduction, the first characteristics of the phases which contain the puzzles. Some simple sketches perhaps to complement instructions, showing the first indications on what the game designer wants in terms of art. The gaming team works like the rest of the company with a program called Jira where team members can assign each other tasks. So requests from game designer to concept artist will come as assigned tasks, but the gaming team also works extensively in phone meetings to ensure that no details are lost, briefing each other over phone every day. Everything is bite size, Emmanouil will get one or two art requests at a time and then start sketching. Finished visuals go into the game design document which is gradually perfected.

Emmanouil has a lot of creative license within a request to go in the visual direction he finds best, within the framework of the game, in this case an adventure puzzle game centered around the helpful little frog Lif. Sometimes a request can contain technical parts that have to do with game mechanics, like for instance “the jumbo lizard needs a tongue that is stretched out and curls around objects so that it can pick bamboo stems” In that case the curled tongue is needed to keep with the game design and the action that will take place, but what the lizard looks like besides that is up for interpretation by the artist. Emmanouil will do a number of sketches for this lizard, do different types of lizards, do the same style of lizard from a number of different angles and so forth. He will pick a few sketches that he prefers and then present to the team. When the choice is made of which lizard to go with, he gets to work coloring and perfecting the drawing.

For a game like Oh Frog the process is different from many other games when it comes to research, because it is almost completely built on imagination. The art style is cartoon-based, the story is about a magical fantasy land and the target group is adults and children from 8 and up, together this means that the game visual is meant to be silly, funny, creative and sometimes even stupid. The kind of stupid you laugh at lovingly and appreciate for the entertainment. Hence when Emmanouil gets the instruction to do something for Oh Frog, he very rarely does research in terms of determining what objects look like in real life. In fact, he actively stays away from it because he does not want to be influenced by the real world. Basically, natural circumstances do not help in his process. If the object is a lizard he knows enough about lizards and their fundamental traits, and can from that go directly into the mindset of the cartoonist – creating the kind of silly, funny and loopy lizard you will never find in your actual back yard. For research on this type of game he instead takes in other kinds of art, for instance studying old cartoons like Ben and Jerry or the Pink Panther for inspiration on cartoon facial expressions, movements etc. Now if there is some element introduced that is very specific and/or rare and needs to be understood for the context of the game story, he will research what the “live version” looks like, for input and to get in the right mood. But in that case making sure to only bring a limited number of actual characteristics into the final visual, just enough to make the story progress as planned, but still keeping with the original, imaginative cartoonish art style. Emmanouil points out that when he works on something like an action game set in space, or similar reality-based genres, the complete opposite prevails. Then he devotes a sizeable amount of his time on research to ensure that the visuals are plausible as well as impressive. Hence the genre has great impact on the work of not just the designer but also the concept artist. He or she needs to adapt to the requirements and the goal of the game and that results in different processes for different projects.

Emmanouil works exclusively in Photoshop, using that same program for all the different stages in his work. He does not do preliminary sketches with pen and paper, he wants them digital from the very start and then slowly build them from there. The first sketches are in black lines and made by hand. Once an object is final, Emmanouil uses a vector technique to get all the lines perfect. This technique means the artist can control every single curve, making the lines perfectly clear and crispy. This is time-consuming but makes for a much more professional result, unless of course the theme is such that one wants hand drawn, rugged lines for effect. The image below shows how drawing with vectors work. Emmanouil has first done a rough sketch of a mug on a table. Then he enhances the image and with the vector tool superimposes a thin line all along the chosen drawn line, stopping to add many small points along it, as can be seen by the right side of the mug in the first image below. The program will then transform the vector lines and points into a smooth line, as can be seen on the second image.

Emmanouil will do vector lines on all the main images, whereas if there for instance are bushes and trees in the background of a scene in Oh Frog, he will choose to draw them by hand only. To save time but also because it creates a functional contrast. When the art is finished, Emmanouil exports image files in Photoshop original format and uploads them on Dropbox for the developer to extract. This is not a format that works for programming in Unity, but our Developer and Unity Specialist, Michail Moiropoulos, has constructed his own script that transforms the art into the exact form he needs. And speaking of Michail – the next time we venture into the world of Gaming, the last page will be taken from his complex book of code and problem solving. Can’t wait to hear about it? Neither can we! Stay tuned!